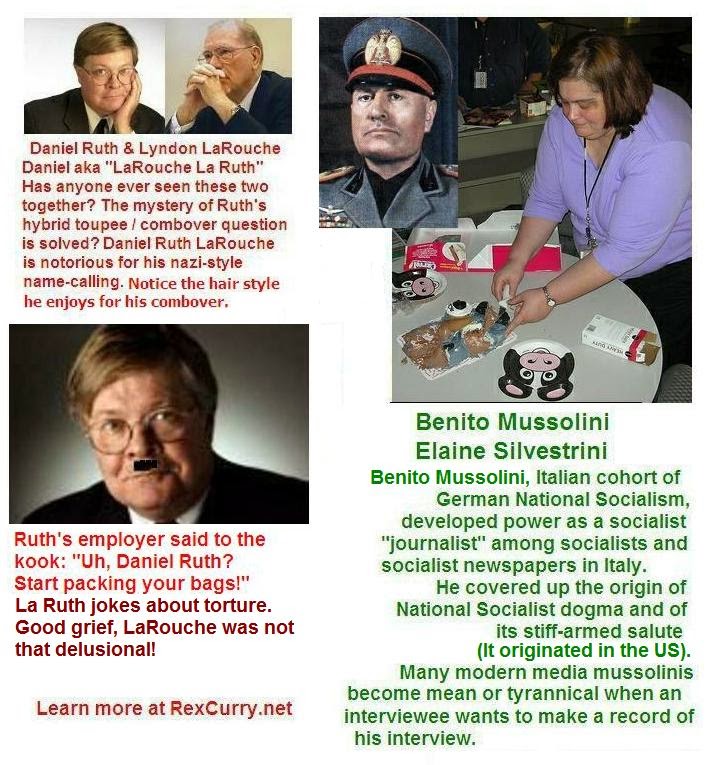 The first true news source to announce the layoff of Daniel Ruth, other layoffs and the deteriorating format of the Tampa Tribune newspaper was RexCurry.net. The paper, part of the merged Tribune/WFLA-Ch. 8/ TBO.com, has already gone through several rounds of job reductions.

An Executive Editor at the newspaper communicated with urgency: “... I’m worried that if we don’t change how we think about this further it won’t matter what falls through the cracks because we’ll have no readers.”

Partial blame for the Tribune's decline goes to two writers: Daniel Ruth and Elaine Silvestrini. The mess follows mere weeks after "Daniel Ruth LaRouche" and "Elaine Silvestrini Mussolini" were exposed in public debate challenges. That coincides with the time when the newspaper said to the kook: "Uh, Daniel Ruth? Start packing your bags!" http://rexcurry.net/daniel-ruth-elaine-silvestrini.jpg

Silvestrini and Ruth are part of a widespread problem at all newspapers: ignorant writing and hate-mongering. Earlier Layoffs at the Tribune followed shortly after a previous defeat of Ruth by Dr. Rex Curry (See any internet search for "Tampa Tribune lays off").
http://rexcurry.net/elaine-silvestrini-tampa-tribune.html

On another occasion, Ruth admitted publicly that locals have labeled him "bigot, prejudiced, hateful and ignorant" among many other similar insults.

That was near the time Daniel Ruth's show on 970 WFLA was cancelled. Uh, Daniel Ruth? Start Packing Your Bags !!

Daniel Ruth: is he Lyndon LaRouche? Or worse?

Has anyone ever seen those two together? Has the mystery of Ruth's hybrid toupee / combover question been solved?  (Ruth once told a critic that Ruth would let the critic find out if Ruth has a hybrid toupee/combover if the critic paid Ruth $5000 -Ruth knew that if the price was high then the critic would pass on Ruth's toupee/combover
question).

Ruth writes flippantly about torture. LaRouche La Ruth's insane clown posse
act is like something out of "Apocalypse Now" meets "A Clockwork Orange."

Good grief, Lyndon LaRouche was not as delusional as Ruth is.

Elaine Silvestrini also acknowledged publicly her error regarding Dr. Curry (although she did not apologize, of course).

The acknowledgement of errors by Ruth and Silvestrini were too late, as the Tribune continued its tailspin down the toilet. http://rexcurry.net/daniel-ruth-tampa-tribune.html

Silvestrini and Ruth are news repeaters. The term "repeaters" and "reporters" is synonymous, although "repeaters" explains more about radio, TV, and print-news people (such as Silvestrini and Ruth): they repeat claptrap that is spouted by government and government officials. They repeat it as if it is serious, rational and important. That is what happens to "news" media in a police state.  They repeat the national socialist dogma of their newspapers ("national socialist" is what you-know-who called himself, and it is necessary to point that out in case the newspapers’ readers (both of them) read this because that fact is covered-up in the rags (as if the rags are trying to rehabilitate the dogma)).

Silvestrini and Ruth repeat propaganda as if it were the pledge of allegiance that they were taught to repeat in government schools (socialist schools).

Newspapers are collapsing under the internet and under Dr. Curry's internet work (taking top spots on the web for exposing Silvestrini, Ruth and their newspapers). Silvestrini and Ruth are learning (the hard way) why newspapers are losing under the web. A Google search for Elaine Silvestrini shows that top spots are the RexCurry.net page (and others) exposing her. A Google image search for Elaine Silvestrini shows similar results. Similar results show in searches for Daniel Ruth. Videos expose them in the top spots in searches on Youtube.com for Elaine Silvestrini, Daniel Ruth, and their newspapers. For years, RexCurry.net has been a top spot in a Google search for Daniel Ruth, after Ruth's previous humiliating defeat, and that explains why Daniel the near-sighted loopy leperchaun [sic] remains bitter, thin-skinned and sour.
http://www.youtube.com/watch?v=BssWWZ3XEe4